The world's first broadcast quality miniature portable audio mixer, the SQN-3, was produced in the Isle of Man in June 1980, but its evolution must be traced back about a decade earlier.

In 1970 Document Film Services Ltd. operating from 8-12 Broadwick Street in Soho, the centre of London's film industry, was set up to provide 16mm filming services for makers of television documentaries. Cameramen of the calibre of Charles Stewart, Ernest Vincze, Ivan Strasburg and Mike Fox ensured that Document's filming equipment was kept busy in all corners of the globe. Document crews filmed the majority of Granada Television's award winning ‘Disappearing World’ programmes. Back at base there were five cutting rooms, a viewing theatre, negative cutting facility and sound transfer bay.

The recorder used for sound gathering on the earlier shows was the Nagra III which was judged to be more reliable than its Nagra IV successor at that time. Document also had the first two Eclair NPR cameras in Britain equipped with the Perfectone crystal sync. motor which eliminated the need for a synchronising link to the Nagra.

It was also around this time that Kudelski S.A. released for sale to the public a miniature recorder which, it was rumoured, had been designed for the surveillance needs of various secret services. The Nagra SN or mini-Nagra used tape of the same width as Philips' compact cassettes but loaded on spools. The SNN version recorded a mono full track signal at 3.75 inches / sec (95mm/s). Running off two AA batteries, it would record for six hours and its crystal controlled motor would hold sync. over a 400ft roll of film. Many television companies bought the machine in the hope that it could take the place of radio microphone links, which were less reliable than today. Unfortunately, the fact that the microphone amplifier circuit of the SN incorporated an Automatic Level Control made it unsuitable for professional film sound. Kudelski promised a solution utilising the line level input and a hand control unit with meter. There was a delay of about two years before this SMR unit appeared.

When the SMR finally did appear it was judged by Document to be unsatisfactory. In the first place the meter showing the recording level only worked when the recorder was running, and secondly the device used an attached microphone capsule and so did not allow crews to employ the Sennheiser MKH Series microphones they wished to use.

Using the Nagra SNN would reduce the baggage bills for the Nagra III sound kit (weighing in all about 50kg with tapes and batteries for a month). Under considerable pressure from Brian Moser, the executive producer of the ‘Disappearing World’ Series, the directors of Document decided to solve the problem by manufacturing a device themselves. To this end they approached Arthur Quinn, whom they had previously consulted over electronic solutions. The next departure with Brian Moser for the Andes was only a few weeks away but a device was made in time. It was named the SQN-1 from the initials of Sine Qua Non, Latin for indispensable, because without it the Nagra SN could not be used. 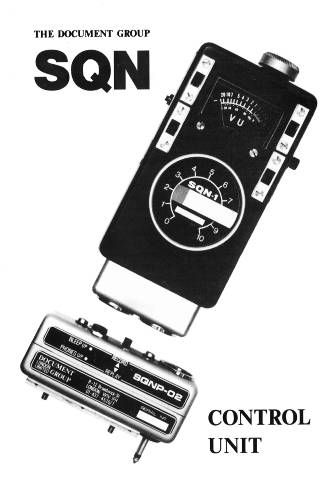 While there were some problems with the speed constancy of the SN recorder at the very low temperatures encountered in the Andes, the SQN-1 performed perfectly. The weight of the kit had been sucessfully reduced to 4kg, and soon it was off to record in the Himalayas.

It was quickly apparent that more SQN-1 control units were needed not only for Document's own operations but also for the cognoscenti who frequented Document and wanted to use them. And thus an industry was born. The need arose early on to provide a second input channel and this was achieved by constructing a frame to hold the recorder and second microphone amplifier.

A synchroniser was also required, for transfer from SN tapes to 16mm magnetic film in those days before time code. Despite the constant speed of the SN motor most film users felt more comfortable with a crystal generated sync. pulse. The SN had no room for a separate pilot track so the synchronising signal had to be fed into the soundtrack at sub-audio frequency and then filtered out on replay. Kudelski's preferred frequency for this was 10Hz, but in England Samuelson's went for 25Hz and in America Ryder Sound chose 30Hz. Any synchroniser worth its salt would need to resolve all these frequencies.

Arthur Quinn designed such a synchroniser which was supplied to Granada Television in Manchester. With this working successfully it was decided to go a step further. Kudelski's SLO resolver had been used in the transfer bay for some years to resolve 50Hz Neopilot pulses, but in order to resolve 60 Hz American standard pulses it was necessary to change a circuit board in the SLO. A system for replaying SN tapes on the 1/4 inch Nagra III tape deck had already been devised, using special platters and take up reels. This had the advantage of providing normal fast spooling instead of the SN's hand rewind. What was needed now was a single resolver capable of handling all pulse frequencies from 10 to 60 Hz and controlling the Nagra III. The result was the SPR-I Universal Synchroniser which, working from a 50 or 60 Hz reference could automatically synchronise virtually any recorder to 10, 25, 30, 50 or 60 Hz pilot tones. The first model was installed in Document's transfer bay in December 1976. 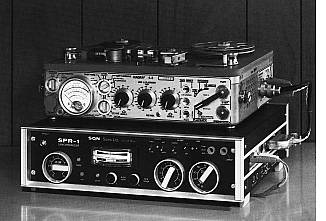 Considering that it was a laboratory instrument introduced just before videotape was to transform the television scene, the SPR-1 was a remarkable success with more than 100 units sold over the decade from its introduction. Notable users included Universal Studios, Hollywood and Sound One Corp. of New York. The final batch was supplied to Leevers-Rich to be installed at Pinewood Studios.

Only a few months before the introduction of the SPR-1 a recordist at BBC TV's Ealing Film Studios had suggested producing a 3-channel mixer on which the Nagra SN with its associated crystal sync pulse generator could be mounted. This would provide more facilites than the Nagra III or IV in a much smaller package. The idea was very appealing but it was clear that it would never be realised and manufactured as a part time diversion of Document Film Services. Therefore in 1977 Douglas Macintosh and Barrie Barton from Document visited the Isle of Man, where they had family connections, to set up SQN Electronics Ltd. and SQN Sales Ltd to manufacture and market the SPR-1 and yet to be designed mixers.

The first Manx factory for SQN products was set up in Port St. Mary at 7A High Street. The aim at that time was to make a mixer front end for the Nagra SNN and an ingenious system for latching the recorder to the top of the mixer was devised, using the Plug Box on the recorder and a cradle on the mixer top.

This configuration of mixer was to be known as the SQN-3 Type C (for control unit) and featured a front panel control for the SNN motor. The crystal oscillator and some interfacing circuitry were contained in the SQNP-04 "plug-box" which was screwed to the recorder and linked to the mixer via a D-connector in the top lid. The mixer had three low noise microphone amplifiers with powering for all professional microphones available on each channel and a fourth input for line level signals. Off tape monitoring was provided and the level meter was peak reading but with a linear scale rather than the quasi-logarithmic scale of a true PPM. The power supply used a switch-mode voltage converter, which may have been unique at that time. In addition, the power supply inputs were electrically isolated from the mixer chassis. This neatly bypassed the problems that could arise when powering the pure mixer variant from the 1/4 inch Nagra recorders which came with both positive and negative earth batteries. The general standard of construction and the size were chosen to blend neatly with the extremely high build quality of the SN recorder. Special knobs were designed, which have remained standard on all SQN mixers to the present - their shape even forms part of the company logo. Another feature which was established at the start was to put enough information on the bottom label of the mixer to allow any competent soundman to use it straight away (and to wire whatever cables were necessary). The internal electronics were mostly to military specifications and the whole audio path used discrete components.

During the development of the mixer it was realised that it could be more than a front end for the Nagra SN and a decision was made to produce the SQN-3 type M as a straight mixer for use with the Nagra IV or IS. It was known that some recordists had no desire to use the mini Nagra and there had never been a mixer comparable with the SQN-3 for the bigger machines. The decision proved to be a correct one.

Examples of both these mixers were exhibited at Photokina in October 1980, where they were seen by representatives of BBC TV's Outside Broadcasts.